Kristin Stewart walked out on crutches at the Oscar’s after sustaining a cut to the bottom of her foot from a piece of glass.  Apparently she was having some fun running on the sidewalk with Rob Pattinson’s friend’s, Marcus Foster and Jack Standen.

Perhaps she was wearing no shoes when she was on the sidewalk and stepped on the glass.  We can’t blame her for wanting to just have a little fun like the rest of us. Right?

Well here is where I think the story goes bad.  She gathers her main adviser,  a manicurist, Ashlie Johnson.  And the advice that she was seeking was whether she should wear flats or heels!  Or should she just wear only one heel?!  There were a few smart moments when they decided that crutches might be a good idea.  By the way, I think she chose flats, good advice Ashlie!

I can’t help but wonder if anyone thought that maybe there was still some glass in her foot or maybe the area could become infected.  Now I don’t expect the manicurist to come up with these suggestions, apparently she was just asked for fashion advice.  But was there someone smart enough to seek out the care of a podiatrist and to get some solid medical treatment? 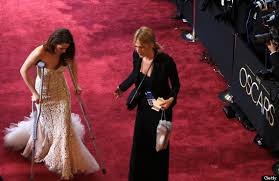 Cuts on the bottom of the foot are not to be taken lightly.  There are major nerves and arteries that can be cut and there can be serious damage.  Cuts can often scar and cause ongoing pain even after healing without proper treatment.  And then there is the chance that the glass wasn’t all that clean and an infection could set in.  Or there could still be some glass in the foot.

All I ask from you is to make a better choice than Kristen Stewart and her manicurist.  Hold the heels and get the pressure off of your foot so the glass doesn’t penetrate deeper. Please realize that a cut from glass or other object on the bottom of the foot requires medical attention.

I guess the Academy Awards are a big deal and maybe if I was in the same position, I may have made a similar mistake.  Maybe it’s just one of those life experiences that makes you look back and laugh.  Anne Hathaway had a good laugh when she said, “Well, break a leg……….oops!

So who are you going to call if you get glass in your foot?  Your Podiatrist!  If you’re in Tampa, I would be honored to be your podiatrist even if your not famous.