If you are an avid soccer fan then you have most likely been glued to the television recently for the Confederations cup being held in Brazil. Italian superstar striker Mario Balotelli will miss the remainder of the games after suffering a torn quadriceps in a recent game. 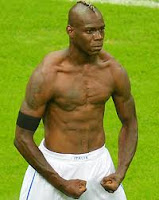 You may be thinking, is a quadriceps tear something that a podiatrist typically deals with? The answer to that is no, but unfortunately a torn quadricep can affect the gait of an individual with long term sequelae, which podiatrist do deal with. The quadriceps is a group of four muscles that make up the front of your thigh. The primary function of the quadriceps is to extend the leg due to a direct pull at the knee joint. One specific muscle, the rectus femoris, also aids in flexion of the hip. Both of these attributes are vital in running, walking and squatting. Clearly running is an important aspect of soccer and having the inability to extend your leg and flex your hip make it difficult to even kick a soccer ball.
So how does this relate to podiatry? During ambulation, as stated above, the quadriceps extends your leg while also stabilizing your patella or knee bone. If portions of the quadriceps are torn it will cause weakness, therefore causing your knee and leg extension to have an advantageous pull in a certain direction. In other words if the outside (or lateral) aspect of the quadriceps is torn you will have more pull inside (or medially). The same is true conversely. Not only can uneven pull lead to impingement or pain to either the inside or outside of your knee, it can alter your gait by causing joints such as the ankle and foot joints to act differently because of it. This can lead to pain in your foot and ankles causing instability.
If you are experiencing difficulty walking due to pain in your legs, feet or ankles call Advanced Podiatry for an appointment at 813-875-0555.
Sharing Is Nice!